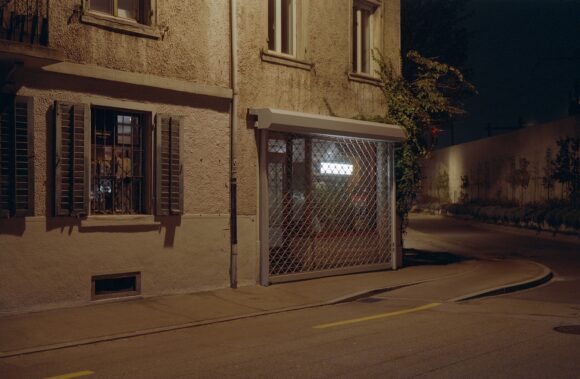 An Attempt to Distribute Invisibility Fairly

For the past year, I’ve only been photographing houses. I no longer have good feelings about photographing people. At least people I don’t know.

Knowledge and light seem to belong closely together. To illuminate something means to get to the bottom of it, to understand it. To loosen the archaic sediments in the dark crevices of the past with bright light, to dissect the wizened pieces of an ideological crust in a bright beam, to dry them in the warm sun of reason and to redrap them well lit in the middle of the room. If to photograph is to capture the reflection of reality – as longer or shorter waves of the electromagnetic spectrum – on a particular material, then perhaps photography is a relative to incorruptibility.

I am a white, heterosexual male. Invisibility is a privilege, invisibility is one of my many privileges. The society I live in is designed for white, heterosexual men. My presence in a restaurant, on the streetcar, shopping or bowling is not an exception, it is the rule. I am not a marked part, I am not to be seen. A man’s story is the story of the world, that’s how novels and movies worked. The story of a woman is the story of that woman. Let me try it this way: Invisibility means to be thought of, to be represented and to be able to represent.

There is a gaze that is out to represent. Perhaps it is the gaze of invisibility. Perhaps it is the gaze out of darkness, out of the cozy corner of self-evident non-observance. A paradox, isn’t it? Is it supposed to be a privilege, this invisibility? A privilege not to be noticed? To be disregarded? I remember an interview in BRAVO from around 2001, in which Farin Urlaub gave the tip to dress like wallpaper. So he wouldn’t stand out. That was his main problem as a punk at school, everyone always stared at him. Until he came up with the idea of blending in with the background, with the walls, in the rooms he was in. Not being noticed also means the absence of black eyes and bruises. When does invisibility become a stigma, when does it lead to exclusion?

René Pollesch says that it must be a matter of better distributing invisibility. Visibility and invisibility are never symmetrical, invisibility is always privileged. Contrary to what is commonly thought, visual politics should not aim to bring the hitherto underrepresented into the light, but to make the possibility of disappearance, the gain of darkness, accessible. Light and representation are siblings. Disappearing into the dark can also mean not being represented. Is there a mistake in my thought here? Or, in other words, whose body is capable of seeing any advantage in this at all?

So many forms of exclusion, so many reasons for fear, so many possibilities for difference. But: Farin and I are men. I write as a man, the gaze he is exposed to at school does not resemble those he would be exposed to as a woman. After all, it is he himself who makes him an object, on the way to the wallpaper. Men look differently at men, look differently at women: The gaze of the (white, heterosexual) man objectifies the female body, turns it into a container of male desire. In 1975 Laura Mulvey describes the concept of the male gaze for the first time in her psychoanalytic analysis of film in Visual Pleasures and Narrative Cinema. Now: whose body, then, is even capable of thinking of invisibility as progress without feeling hoodwinked?

Another case of invisibility: who is the woman who also lost her house and besides continues to have bruises? Misogyny also produces an invisibility, but it is that of exclusion, a violent one, a condescending one. To demand a right to invisibility is not to perpetuate oblivion. Being invisible is perhaps even the opposite of being forgotten. Activity and passivity, you accomplices, can you guide me here?

Activity could be the euphemistic expression of the suppression of everything that does not triumph with habitualised strength, that is swallowed up in the maelstrom of patriarchal hegemony. If the neoliberal growth paradigm is that of tense muscles, of bodies always ready for action, full of the fear of only reacting and in the rapture of obedience to innovation for innovation’s sake, blinded by the desire for acceleration – then it is the fear of slackness that tenses these muscles. Passivity, the wise sister of frugality, of insight and tolerance, it is always to be overtaken. In the culture of capital, action always enjoys the privilege before renunciation. But what if this renunciation is not a self-chosen one, surpressed, muted,  rigid with fear?

I enter the house on the outskirts of the city. It has not burned down, but it is uninhabited. I try to move quietly. It is impossible with the broken pieces on the floor. On the porch a recliner, in front of it a cardboard box full of empty cans, a stuffed animal, a DVD player with a broken front panel, magazines swollen in the rain. The door to the house is a finger’s width open, I have no trouble entering. It smells of damp mortar, I see a crooked cupboard, empty, look right into a kitchen with drawers torn out, newspapers on the floor. A staircase to the second floor. Next to the stairs on the floor a charred spot, next to it aluminum foil. The steps creak. The room behind the second door on the left in the hallway is bright. It seems to dazzle me, but I don’t know why. A bright white reflects off the walls, off the floor itself, through dusty, dull air. Everything seems to charge each other, in light, in visibility. A shelf is embedded in the wall, emptied except for three rags, on the floor scraps of plastic film, packing material. It is so bright, I cannot see, I turn my gaze to the floor and feel the presence. With lowered eyes, I recognize you by not seeing you. I don’t see and yet I know and you already disappeared again. How can I see without looking, without staring, without wanting – a grasp without to grasping, conception without possession.

The male (white, heterosexual) body is an unquestioned habit or, I think of Sara Ahmed, an institution: „when things become institutional they recede from consciousness.“1 The institutionalized is the unconscious, Farin as wallpaper is the best example. His Body and mine are such unmarked parts, we disappear from the collective consciousness. The hegemony is invisible, like the design of power. The only thing that is noticeable is the deviation, the difference.

There is a gaze that is out to represent, perhaps it is the gaze of invisibility.

A visual politics of equal distribution of this invisibility, however, ultimately remains oriented to the logic of marking – with reversed signs, a „transfer without transformation“ (bell hooks).2 But what would be a conception of sign, apart from such a hierarchy. To begin this search here one could lower his eyes. „A habit does not question,“3 writes Gayatri Spivak, I look at you and wish nothing more than to distribute this certainty fairly. The certainty of not being questioned.