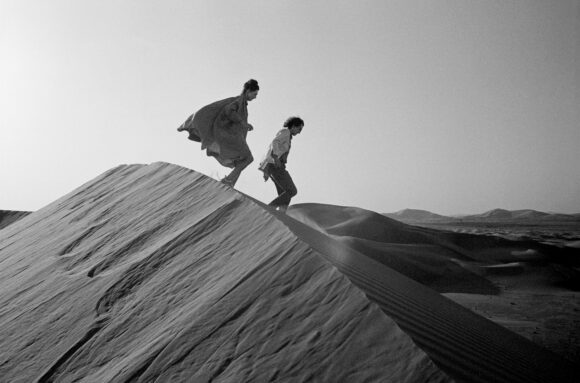 If Christo and Jeanne-Claude’s wrapping actions enable us to rediscover entire buildings, if hiding helps to see better, if our gaze is sharpened by the emancipatory effect of a veil, then it would be time to hide Jeanne-Claude’s name on every page of every book. To highlight it with a red felt pen until the paper tears apart. Perhaps we should cover her face with burlap on every photograph so that everybody finally remember her.

No, of course it’s not necessary to go that far. In reality it doesn’t matter how many layers of fabric women are covered with. Naked or veiled, they are forgotten and excluded from the writing of history. This fact is particularly evident in all the texts devoted to the artists duo Christo and Jeanne-Claude: the authors and journalists mostly write only about Christo and his projects, or sometimes, with any luck, about their common works. This way of formulating the sentences, literally making Jeanne-Claude disappear, is very significant. In a book by Jacob-Baal Teshuva, Jeanne-Claude is presented as „Christo’s wife and collaborator“1. Wife and collaborator.

In every publication as well as in the current exhibition at the Palais Populaire in Berlin, the biographical texts supposed to describe the history of the duo only focus on the career of Christo Javareff. It describes how he, always just he, met Jeanne-Claude. Why he moved to Paris and what he did there. With which artists he was in contact. Jeanne-Claude’s life seems to be of much less interest to writers and curators. She was born in Casablanca (the same day as him) into a French family and studied Latin and philosophy at the University of Tunis. Later she came to Paris, where he met her. That’s often all we can learn about her. The biographical texts give a vision of the duo in which Christo is the only active part both artistically and in the relationship. Jeanne-Claude is relegated to the background, confined in a passive position.

When they met in 1958, Jeanne-Claude was not an artist, whereas Christo was already working as an artist. That is why their first common projects were produced under the name of Christo. This from 1961 (for Stacked Oil Barrels and Dockside Packages, port of Cologne) to 1994. That year they decided that their official name as a duo would be „Christo and Jeanne-Claude“2. This hasn’t changed ever since. However, they continue to be called „Christo“ everywhere until today. The titles of books and exhibitions always respect the official name, nevertheless Jeanne-Claude’s name mostly disappear from every sentence from the first page or exhibition wall on. If anything, the authors write about „the Christos“. Whereas „Christo and Jeanne-Claude“ has been their official name since 1994. This repetition seems quite necessary.

1994 is the year I was born. I’m still young, but I’ve had time to learn a lot in 25 years: I’ve learned to speak several languages, to read, to write, to drive a bicycle, a monocyle, a car, to appreciate wine, to sew masks, to make pancakes and to develop political thinking. However, these 25 years have obviously not been enough for the artistic scene to accept the name of „Christo and Jeanne-Claude“ and to speak and write sentences in the plural form. When one knows how many books have been published and when one sees how many times Jeanne-Claude’s name has been „forgotten“, and this since 1994, one is forced to admit the truth: Jeanne-Claude is kept trapped in a patriarchal system in which women have to live and die in the shadow of powerful men.

However, Jeanne-Claude’s part in the artistic work was no less important than Christo’s. Most of the time, they developed ideas for new projects together, so it is difficult to attribute an idea to one or the other. Nevertheless, the project Surrounded Islands is an exception as the couple admitted much later that it was an idea of Jeanne-Claude. The reason for this late explanation is enlightening: Christo and Jeanne-Claude were convinced that they would never get the building permit if anyone knew that the idea came from a woman. Jeanne-Claude explained this in an interview3 in which she also described how some responsibilities were split between Christo and her. Christo drew and painted the sketches that were to be sold to finance the projects, whereas Jeanne-Claude was in charge of the accounting among other things. She also played a very important part in the negotiations with political and municipal institutions for the acquisition of building permits. Today, she would certainly be called a „project manager“. This part of the work, although invisible to the public, was essential. In an interview, Christo compared their artistic work to that of architects and town planners. „Nobody discusses a painting until the painter has painted it. No one discusses a sculpture until the sculptor has sculpted it. But everybody discusses a new highway, a new bridge, a new skyscraper, before they exist. And so is it for our works too.“4 Therefore, Jeanne-Claude’s work should definitely not be put aside. On the contrary, it must be highlighted.

The current exhibition at the Palais Populaire in Berlin, devoted to the artists duo, shows exclusively sketches and small wrapped objects5. In other words: only pieces made by Christo without Jeanne-Claude, for she never drew for the projects. There are also some photographs of accomplished projects. When, in 2020, an exhibition entitled „Christo and Jeanne-Claude“ shows only pieces made by Christo, it becomes clear that Jeanne-Claude is being deliberately left apart. And that is either due to an intolerable decision or to a very questionable ignorance. In either case, Jeanne-Claude is made invisible. Her part is certainly less easy to expose than Christo’s sketches, but that is no reason to make her almost completely disappear. The curators today have the responsibility and the challenge of deconstructing the patriarchal representation of Christo and Jeanne-Claude’s art. The public must become aware of Jeanne-Claude’s role. This mission has clearly failed at the Palais Populaire. In July the exhibition „Christo and Jeanne-Claude, Paris“ will open at the Centre Pompidou in Paris. The current show in Berlin proves that the patriarchal representation of the duo must be overcome, and that Jeanne-Claude can’t be relayed in the background. Not once again.

1 Jacob Baal-Teshuva, Christo: Der Reichstag und urbane Projekte. Prestel Verlag, Munich, 1993
2 Every information is available on the official website christojeanneclaude.net . „Because Christo was already an artist when they met in 1958 in Paris, and Jeanne-Claude was not an artist then, they have decided that their name will be „Christo and Jeanne-Claude,“ NOT „Jeanne-Claude and Christo.““
3 „Entretien avec Christo et Jeanne-Claude“. L’en-je lacanien 4, Nr. 1 (2005): 159–85. https://doi.org/10.3917/enje.004.0159.
4 Quoten by Jacob Baal-Teshuva, in Christo und Jeanne-Claude, Taschen, Cologne, 1995
5 The exhibited objects come from the collection of Ingrid and Thomas Jochheim.