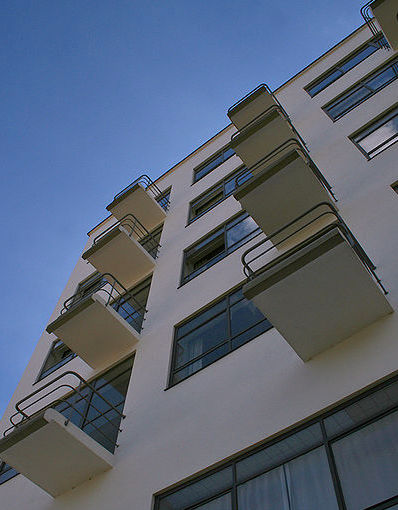 Recently, politician Ursula von der Leyen pitched the “New European Bauhaus” in the feuilleton of the conservative German newspaper Frankfurter Allgemeine Zeitung. In a guest article, the President of the European Commission described how the arts should support the implementation of Brussel’s sustainability agenda, the Green Deal. Von der Leyen pictured the European Bauhaus as an interdisciplinary platform for artists, students, architects, engineers and designers, who are supposed to make the deal „vivid and tangible, in an innovative and inclusive way“. Further, sustainability and „good design“ must be combined, and the „digitalization megatrend“ harvested. Over the next two years, the EU wants to introduce the program by initiating five European Bauhaus projects in various member states, which will approach topics such as demography, mobility, digitality, energy, and construction materials through a sustainability lens.

With this vision, the EU demonstrates a rather pragmatic understanding of culture. The climate crisis demands fundamental changes in systemic structures and individual habits. Passing the moderation of this transition to the arts is in line with the self-conception of the Bauhaus, which indeed aimed to shape a new society. However, the reform school, founded 1919 in Weimar, had to accommodate ongoing negotiations of the precise nature of this social Gesamtkunstwerk. The academy also saw permanent arguments about the values by which art and life should be unified, with such great differences that the term Bauhaus can only be used as a kaleidoscope. Since decades, long before the increased debates of the anniversary year 2019, scholars have been exploring the various nuances of the Bauhaus, resulting in the untranslatable plural Bauhäuser. Taking into account this variety, they have as well tried to identify parallels and superimpositions of these various schools. For example, architecture historian Philipp Oswalt notes that all Bauhäuser responded to the crisis of modernism they were facing, albeit with divergent visions. When the school opened in Weimar, Europeans found themselves in a world already heavily transformed by industrialization and urbanization. In various acts of creative mediation, Bauhaus members tried to overcome the disruption between the past and the future. Bold designs clarified visually and haptically where the highly dynamic society was heading culturally. Today, the Bauhaus is primarily associated with a form of modernism that sought to structure the overwhelming modern experience with apparent simplicity and order. This style is perhaps so often associated with the Bauhaus because even in retrospect it still promises a reduction in complexity: Icons like the Haus Horn seem to provide clear lines for an answer to the question of what the Bauhaus was.

Much more clarifying remains Oswalt’s assumption that the Bauhaus can only be understood in the context of the process of modernization which they wanted to direct, but which als drove them. Precisely because the Bauhäuser established their styles and agendas in response to social change and postulated their own understanding of time, the Bauhaus should always be regarded in a historicizing way. To instead assume that the Bauhaus is timeless means to uncritically adopt its optimistic progress mentality. It seems remarkable that current climate politicians, who have to manage the ecologically disastrous fallout of modernity, choose the ideas of the early 20th century as inspiration. In fact, not only the European Commission raises the past: References to modernity increasingly determine the style of contemporary sustainability narratives and imagery. In the United States, the Green New Deal is marketed with a programmatic reference to the country’s major reform of the 20th century, the New Deal, which Theodor Roosevelt imposed to handle the Great Depression — and by which he created the basis for the later boom of the US economy and set up a culture of unprecedented environmental damage.

By looking backwards, contemporary politicians do not suggest a time loop or an eternal return of the consumer cultural development of the 20th century. Instead, their visions pose as off-modern: they depart from the German and US modernities to speculate about passed chances and cultural departures not taken in the early 20th century. In doing so, however, they run the risk of neglecting historical depth. They ignore why German society cheered fascism a few years after the founding of the Bauhaus, why members of the school were sympathetic to national socialism. Von der Leyen’s pitch suggests neglecting the Third Reich in two ways: transhistorically by raising the liberal Germany that was supposedly postulated by the Bauhaus, and transatlantically by appropriating the anti-fascist vision of the New Deal. The President’s dreamy reading of history makes all political agendas with a long-term perspective issued by the Commission questionable. Do we really want to entrust the complexity of climate policy planning to politicians who blur the complexity of history in newspaper feuilletons?

The Green Deals are vague not only for their sentimentality, but also because the term is becoming increasingly meaningless. After various journalists and economists introduced the concept as a radical, ecological reorientation of neoliberal economies in the course of the financial crisis of 2008, it was appropriated by various parties, including institutional policymakers. Critics accuse the EU and the US Democrats of undermining the concept. A Green Deal without strict demands and measures is only a hollow term. In view of the present climate crisis, such vagueness is a clear positioning: it means a continuation of destruction. Although the EU Environment Agency describes its Green Deal as a response to „environmental problems of unprecedented scale and urgency,“ its goal of becoming climate-neutral by 2050 means, according to current research, that global warming cannot be limited to 1.5 degrees. For many regions, this would mean a fatal aggravation of the already existing damage caused by the climate crisis. Although the free-floating goals of the draft were tightened in early October, this was only due to the militancy of climate groups inside and outside parliament. And according to the opposition, even the stricter draft is not enough to limit the rise in temperature in a globally responsible manner; moreover, financing and implementation have hardly been clarified.

Apparently, the European Commission wants the arts dubbed as „New European Bauhaus“ to implement the Green Deal without defining the many variables of its concept. Therefore, the creatives and researchers who become part of the new platform have the opportunity to refuse committing themselves to the implementation of the current plan, to shift the goals in an actually ecological direction. They can also contribute to reflecting the nostalgia of the Bauhaus metaphor. Not only the Bauhaus, but also the term Green (New) Deal can thus take on meaning. And therein lies great political potential. Ecological struggles no longer take place only on the streets, but also in communication. So far, mostly the phenomenon of greenwashing demonstrated this fact, which can also be used for a radical, just and active interpretation of climate policy concepts. The sustainability artists commissioned by the Commission have the opportunity for an undisciplined, energetic shaping of EU climate policy. Above all, their alias „New European Bauhaus“ can be understood as a memento of how essential a profound understanding of modernity is for overcoming the climate crisis.