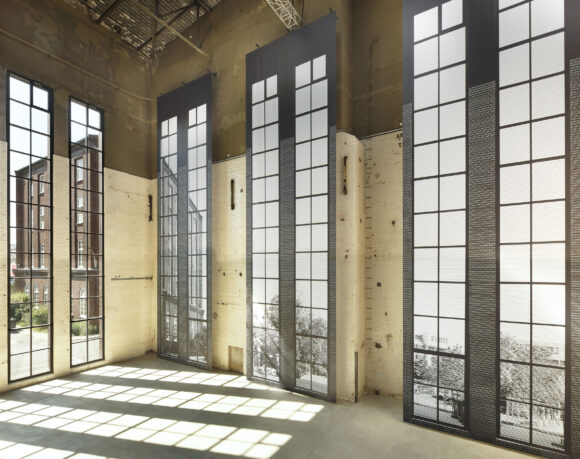 Is there antinomy or complementarity between a window, that gives light, and a photograph that absorbs light?

The Kesselhaus of the Kindl Centre for Contemporary Art is a very large space, 20 metres high and surrounded by four brick walls. The south wall has a tiny entrance door and five narrow windows, which are as high as the wall and in total take up almost the entire width. They open to a place where, when I was there in February, skinny trees and lonely bicycles could be seen. In the room Bettina Pousttchi has hung huge photographs in front of the three remaining walls. They are photos of the place, taken through the windows of the Kesselhaus. So they show exactly what can be seen through the windows, including the window frames themselves. On each wall, the perspective changes slightly, but visually, you would learn as much about the landscape through the photographs as through the windows.

Expect nothing more than what is already here. Become aware of your surroundings and perceive them attentively. Let your gaze swing between the real windows and the photographs of the windows. It almost feels like meditation: focusing on one’s own and present experience of what can be perceived in the moment. The black and white photographs bring, even force you to take a good look at the small place in front of the room. And to realize that you have ignored or overlooked it so far, just as one generally overlooks the streets and details of a city most of the time when going from point A to point B. These photographs, like Brassaï’s, reveal the beauty of neglected urban landscapes. You also notice how beautiful and unique the windows themselves are. And further, how beautiful the courtyard is when seen through the windows. At first, Bettina Pousttchi’s artwork opens and requires attention at several levels.

In addition, the summery landscape of the photographs contrasts with the real view of a cold place torn apart by the wind in the middle of February. Bettina Pousttchi’s installation, like some of her works, offers a reflection on the notion of time. Despite the silence and absolute stillness of the moment, time passes. The relevance of this topic don’t rely exclusively on the contrast between summer and winter moods – the installation can be visited on sunny days too! – but also on the aesthetics of the black and white pictures, which seem timeless. One couldn’t tell whether they are from last year or from the last century.

What does it mean when an artist depicts photography one-to-one as a window? A window, like a photograph, shows a framed, limited part of reality. In Bettina Pousttchi’s photographs, the windows, through their frames and unique tall narrow format, have as much presence and importance as the landscape in the background. The windows as physical separation are in the foreground. Therefore, this installation draws attention not only to the immediate surroundings, but also to the limits of our own perception. There are merely a limited number of perspectives on the outside. This statement leads to an interpretation of the space as a metaphor of the inner world. In this sense, the photographed windows are a reflection of one’s own mental limits: I can only experience reality as myself, and everything I call reality is actually nothing but a purely speculative interpretation. There is no escape to this, as Bettina Pousttchi shows us by creating a space where the eyes can’t see anything else than the view on the courtyard. Like a mirror maze of the soul: it’s not the body that is reflected, but the view on the world. The windows and photographs, further understood as a metaphor of a limited perception, have two main characteristics: they invite us to fantasize about reality beyond the borders – they stimulate the imagination – and they protect us from the perhaps unbearable reality by creating a separation between inside and outside. As Baudelaire said after a daydream about a closed window: “But what does it matter what reality is outside myself, so long as it has helped me to live, to feel that I am and what I am?”

The installation „Panorama“ embodies a complex paradox: everyone is imprisoned in his or her own interpretation of reality and any attempt to try out new perspectives only leads to a further projection of the self. On the other hand, the awareness of one’s own borders is the reason to confront oneself with art – both as an artist and as a viewer: to imagine and fantasize, to think and question, and to try to communicate beyond the borders.

Now that the streets are closing their eyelids despite the loud and glorious start of spring, it’s time to enjoy the poetry of the world seen through the windows!