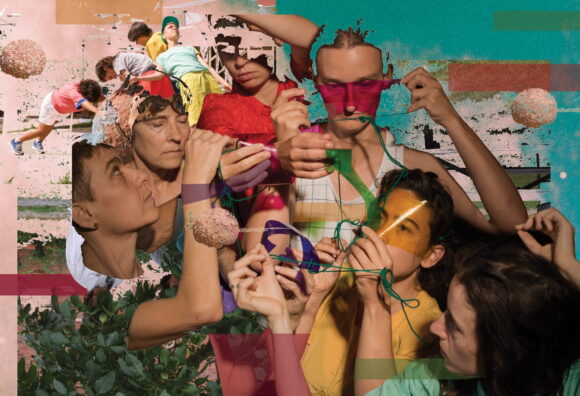 “What kills your creativity?” – “Making a piece.”

Let’s start with a story: Lisa’s first encounter with environmental protection was the hole in the ozone layer and the excessive solar radiation it caused – a very real danger and ever-present topic of discussion in the 1990s, particularly in Australia and New Zealand, where Lisa grew up. She remembers regular weather reports warning of a dangerously high risk of sunburn after only seven minutes in the sun.

Every good story poses questions bigger than ourselves. Or as Donna Haraway writes: “It matters what stories make worlds, what worlds make stories.”1 Science Fiction author Ursula K. Le Guin takes Haraway’s ideas a step further. At the origin of human storytelling, she argues, lies not the spear but rather the simple container. While stories of hunting and killing have always dominated our history, creating the impression that only the heroic deeds of (male) individuals can form the backbone of great narratives, the bag motif offers an alternative origin story of humans and culture. In her 1986 essay The Carrier Bag Theory of Fiction2, Le Guin formulates a feminist history of technology that uses collective gathering and storytelling as a tool for world-making. Rather than the phallic sticks, spears and swords, all that which pokes, slashes and stabs, she locates the origin of culture in the bag, the sling and the vessel, the act of collecting and preserving: “The mammoth hunters spectacularly occupy the cave wall and the mind, but what we actually did to stay alive and fat was gather seeds, roots, sprouts, shoots, leaves, nuts, berries, fruits, and grains, adding bugs and mollusks and netting or snaring […].”3

This notion of non-violent gathering and collective storytelling formed the basis of the nomadic performance project The End is not an Option by the BAG performance collective. Like a meandering river, the project was conceived as a collection in motion, moving nomadically from audience to audience over the course of four residencies at four different locations, collecting and expanding on stories and experiences as they went. As the group journeyed from a community center in Berlin-Marzahn to Wahrenberg in Saxony-Anhalt, back to the FELD Theater in Schöneberg and finally to Vierte Welt at Kottbusser Tor, they collected, shared, distributed, remembered, harvested, speculated and learned, from and with each other, about capitalism, collectivity and the climate crisis – about the major narratives that connect and divide us. Each of the sites they visited revealed a different context and held different stories, traditions and conflicts, as well as presenting various obstacles to collective understanding.

At the community center Stadtwerk Marzahn, the modern satellite city built by East German authorities, members of the collective offered a morning practice under tents they set up for shelter from the midsummer sun and cooked chard and noodles together with people from the neighborhood. In Wahrenberg, a small village on the Elbe River in Saxony-Anhalt, they danced with an alternative village community and talked about what it means when “the End is not an Option.” At the FELD children’s and youth theater at Nollendorfplatz, workshops were held for young people with refugee backgrounds where participants attempted to playfully communicate with one another despite the confusion of languages.

In another counterpoint to the phallocentric heroic epic, the BAG collective experimented with the way they organize their work. Dancers and choreographers Lisa Densem, Roni Katz, Manon Parent, Annegret Schalke, Xenia Taniko and Maya Weinberg sought to share all responsibilities and tasks with one another while at the same time making use of the unique skills of each individual, ranging from lighting and set design to composition, drumming, dramaturgy and breath work, all for the benefit of the collective. It is above all the differences and conflicts that make working collectively difficult and require openness and perseverance from each member. Negotiating differences collectively in such a way that contradictions are recognized and remain visible, that the experience of polyphony loses its threat, means above all creating trust that can endure contradiction and bridge difference.

The things experienced within the collective were repeatedly addressed in their performances, particularly at Vierte Welt, the project’s final stop, where the group shared their experiences with the audience. As they recounted their collective journey, they interrupted and contradicted one other in a complementary way. One person started talking, another interrupted and continued the thread in her own way, making it clear that many different perspectives had combined to form a narrative that was contradictory and consistent at the same time. Each tells the story a little differently. For Lisa, the boys were better at the games, for Manon it was the girls. They even disagreed about the genre they were presenting: Was it a performance? A concert? A musical? “What is the biggest obstacle working in a collective?” Manon asked at one point. Annegret’s response: “There are so many opinions.”

Just as individual skills blur in the BAG collective’s division of labor, so too do the boundaries between stage performance, workshop and rehearsal. Individual narratives intermingle and inform one another and the collected material gives rise to a many-rooted web of knowledge, in which central importance is no longer accorded to beginnings and endings, but rather to ongoing connections, temporary truths and recurrent meandering loops. An end is truly not an option.