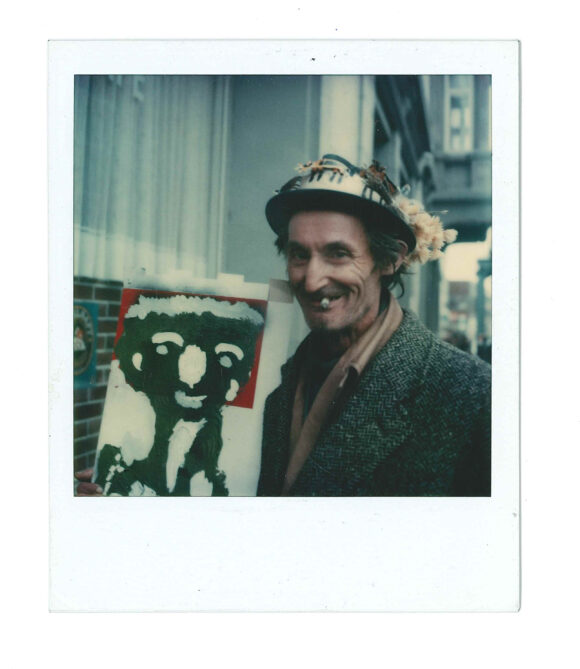 One year ago, for the Gallery Weekend 2019 in Berlin, the Art Cru Gallery in collaboration with Kunstmuseum Thurgau dedicated the Swiss artist Hans Krüsi (1920 Zurich – 1995 St. Gallen) his first solo exhibition. Although the artist was not unknown to me, I had never seen his work before. Drawing, painting, stencil, sculpture… a tour of the small underground gallery was enough to give me an idea of how expansive and varied his artistic work is. Yet, the sound recordings, which he produced from the 1960s onwards1, were not exhibited. They are also generally less known. Some of these unusual works were transferred posthumously to CDs and vinyls, a longer excerpt is even available online. Ernst Thoma, who studied these sound documents and produced an audiobook, was able to reconstruct Krüsi’s way of working. In his studio, the artist played aloud recordings of various sounds (machine or animal noises, radio broadcasts, songs, church bells, insect buzzes, percussion instruments, etc.). Sometimes he would play several cassettes at the same time. Then he recorded this sound landscape with a microphone and mixed diverse layers of sound on one same tape.2 These sound recordings can be called „collages“, a term that the author Antje Vowinckel defines as follows3:

“The term „collage“ is used to describe […] works from all areas of art that are produced by assembling prefabricated, heterogeneous material of the most diverse origins (for example documents, quotations, idioms, but also objects, sounds, music or texts) in such a way that their secondary use remains recognisable to the recipient. This presupposes an artistic claim not to cover up or stylise jumps and breaks, but to put the meaning of the individual elements in a new light, to question them with regard to their original meaning. The individual elements cannot be organically subordinated to a given theme. They resist full integration and come into a tension between their old and new function, for example between former utility value and a material attraction emphasized by the arrangement.”

This long but precise definition applies to Krüsi’s sound recordings. The term is also relevant to other of his works. Also in his paintings with stencils, which aren’t “collages” strictly speaking, he developed graphic arrangements composed of several layers. The conception, the approach and the working method are very similar.

Moreover, Krüsi’s sound recordings have undeniable similarities with many works of his time. The collage itself was introduced into the art world by the Cubists in the early 1910s. It was both a new technique and a new aesthetic that intended to overturn the codes of a bourgeois, established art. At the same time, the concept of collage was also explored in the field of music: On March 9th, 1913 the Italian futurist Luigi Russolo published his manifesto „L’Arte dei rumori“.  The Art of Noises. Among other things, he wanted the music to contribute to the „emancipation of the noise“4. In doing so, he established the fundament of a long tradition: that of so-called Noise Music. Russolo illustrated his concept with a piece he composed, Serenata per Intonarumori e strumenti. The Intonarumori, „noise generators“, are instruments that Russolo himself invented and produced in order to integrate specific noises in his pieces that did not conform to the aesthetic standards of music. Numerous experiments have been carried out in this area afterwards, such as those by Pierre Schaeffer. In the 1940s, this composer of „musique concrète“ is considered one of the first to transfer the concept of „collage“ into music. His concrete approach led him to physically work on the sound by manipulating magnetic tapes containing recordings of everyday sounds5. He used the term „collage“ himself to describe his work6. In contrast to the electronic music, which emerged in Germany during the time, Pierre Schaeffer and the representatives of the musique concrète wanted to use real existing sounds and make perceptible the traces of manual work. A synthetic, electronic sound, which wouldn’t correspond to a real body and would therefore be dematerialized, was of no interest to them. This relationship to the sounds, which are thereby perceived as audible traces of objects, is particularly relevant to understand Hans Krüsi’s work. Krüsi, just like Schaeffer, apparently wanted to maintain a very pure relationship to the sounds. John Cage’s music seems to be even closer to the aesthetics of Krüsi’s collages, even though Cage very much retouched and altered his sounds. Thus the piece Williams Mix (1952) is very similar to Krüsi’s sound recordings, which were made 10 years later. This proximity is mostly due to the fact that Cage’s arrangements are less strictly divided into noise categories than those of Schaeffer. In John Cage’s and Hans Krüsi’s works, sounds of various origins truly meet. Frogs, pigs, insects and trains confront singers, human laughs, radio broadcasts and all kinds of undefined squeaking. They can meet because they are all put on the same level. Here, the hierarchy of sounds is definitely abolished.

Hans Krüsi’s works undoubtedly belong to the music history of the 20th century because Krüsi explored the technology of his time as an artist. Nevertheless, this consideration must be nuanced because it is very difficult to estimate to what extent Krüsi has been influenced by the work of his contemporararies and how strongly this international context has determined his own practice. He has never clearly expressed his intentions or called himself a musician or composer. In this sense, it would be problematic to interpret his work as if he wanted to redefine the academic norms of music, which was the intention of Pierre Schaeffer or of Pablo Picasso and Georges Braque, if one enlarges on the thought and include the visual arts. The history of collage in the 20th century is that of a rebel and subversive art. For this reason, the Outsider Artist Krüsi cannot be placed entirely within the continuity of this modernism. It would be irrelevant to artificially and retrospectively allege him to have intentions and theoretical thoughts which he never spoke of. Moreover, Krüsi’s recordings presumably pursue purposes of a completely different kind, which can hardly reconcile with revolutionary intentions against academic art norms.

As already mentioned, it can be assumed that Krüsi’s sound recordings were played continuously when he was in his studio. In this sense they formed a kind of background noise before which he acted and which he recorded again and again. His collages filled his working and living space, they dressed and decorated it like wallpaper. In 1956, about four years before Krüsi’s first sound recordings, the American artist Richard Hamilton created the famous work Just What Is It That Makes Today’s Home So Different and So Appealing?. In this work, the interior of a 1950s apartment is depicted with irony. It shows how the still young consumer society considerably changed the relationship to one’s own living space. Thanks to an infinite number of standardized products available to everyone at accessible prices, apartments were furnished in such a way that each interior would aim to reflect the identity of its owner. Paradoxically, the aesthetic and practical qualities of the objects were extremely normalized and standardized. In his work, Hamilton thus depicted the modern apartment as a colourful composition (a collage) of various objects, for which the technique of collage was not only suitable but also used ironically.

Whereas Hamilton used collage to question the nature and aesthetics of modern living spaces, Hans Krüsi used sound recordings to compose his own immaterial living space. Krüsi lived in an audible interior that accompanied his work as a painter and his everyday activities. He created for himself a sonorous environment in which he lived and which he constantly expanded with new recordings of the old tapes. Like the soundtrack of a movie, his sound-works have a narrative power and suggest countless images. Krüsi’s tapes and paintings have a lot in common. The animals he has recorded so often are also predominant in his graphical repertoire. Did Krüsi paint what he listened to? His work can’t be summarized so easily, but both his paintings and his sound recordings definitely dealt with his immediate surroundings. He created a new living space for himself, he upholstered and populated his studio with things he knew, things he had appropriated and reproduced by himself. It was as if he had wanted to be enveloped by sounds and images that were perhaps intended to create a protective, reassuring or inspiring atmosphere. Krüsi is also present in his recordings. One can occasionally hear his voice and how he speaks to himself. Now and then he also makes music: flute and percussion instruments. Sometimes he even plays while another song is in background. Has he tried to integrate himself into a world that escaped him? Or did he rather want to assert his individuality? The author and Outsider-Art specialist Maria A. Azzola speaks of „cosmogony“ when the artistic expression of an author leads to the creation of an original world. Which means that some authors produce a peculiar corpus of works that is completely individual but has a universal value because the elements that form them (words, characters, etc.) recreate a world.7 One can place Krüsi’s work in the light of this definition. Some photos of his bedroom show how his own pictures hung, laid and stood everywhere around him. Himself seemed to have hardly any room left. Besides his sound recordings were plaid quite loud and livened up his living room. Therefore, he created for himself a new space that separated him visually and acoustically from the real world. But this insulating material consisted of elements that Krüsi picked in the outside world in the first place. More than a separation, his work is perhaps a deep, though indirect, connection to the world.

Many thanks to Lucienne Peiry and Markus Landert, who made me discover Hans Krüsi’s work.