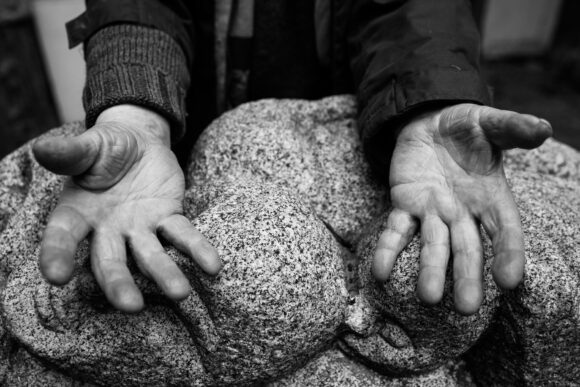 Audre Lorde is neither the first nor the only author who states that the connection with oneself is the very first condition to artistic creativity. This was also a fundamental principle for Rainer Maria Rilke, among others. Even if it seems difficult to reconcile Audre Lorde and Rainer Maria Rilke (a „white old father“7!), their respective relationship to art, to poetry, are in a sense very close. For Lorde as for Rilke, nothing “good” can be written by someone who is not truly listening to him*herself. In his letter to a young poet, Rilke provides the following advice: „You are looking outward, and that above all you should not do now. Nobody can counsel and help you, nobody. There is only one single way. Go into yourself. Search for the reason that bids you write; find out whether it is spreading out its roots in the deepest places of your heart, acknowledge to yourself whether you would have to die if it were denied you to write. This above all – ask yourself in the stillest hour of your night: must I write?”8. And the inner voice that would whisper „yes“ in the stillest hour would be Eros’s voice. This voice is the creative power that Audre Lorde defines as eroticism. Eventually, Rainer Maria Rilke and Audre Lorde agree on one essential point: writing is vital and the source of poetry can only be found within oneself. However, the reason for this statement is very different by both authors.

Audre Lorde encourages every woman to work actively to reconnect to herself, because it leads to a liberation that is absolutely necessary. On the contrary, Rilke recommends to those who do not feel the necessity to write to renounce it. Where does this fundamental difference come from and why is it so significant? For Audre Lorde, the political feminist approach is essential. Those who let the erotic power get to them will become aware of their silences, of their oppression, and will no longer be able to blindly accept them. The erotic power bounds you to take the word and the power in order to change something that has become absolutely unbearable. It is a revolution in itself. That is why „poetry is not a luxury“9 but a necessary self-empowerment. Eros, as a creative power, will help every woman to free themselves from the patriarchy. And that is why Audre Lorde encourages every woman to listen and express themselves. She says herself that she speaks as a Black, lesbian woman who has to deal with intersectional discriminations (sexism, racism, social discrimination, among other things). She is therefore addressing women or else said she is addressing people who can identify themselves with massive oppression. On the one hand, she speaks from her own experience; on the other hand she knows for sure that nothing positive can come out of oppression – most certainly not a better society. There is no such political dimension in Rilke’s works. He wrote from a privileged position and his art did not deal with oppression. The necessity of writing was for him purely individual and private, whereas this necessity corresponds for Audre Lorde to a political commitment and to a liberation.

This photograph is also an embodiment of eroticism – always in the sense of power, according to Lorde’s definition – because it is the result of a specific artistic gesture. While the interpretation of the photograph as a representation of eroticism corresponds to an iconographic reading, the idea of an embodiment of eroticism refers to the artist’s aesthetic approach. This artistic gesture belongs to the photographer Teresa Suárez, who captured Shelomo Selinger’s hands, his history and his sculptures. She is the one who decided to focus on the hands. In doing so, one might say that Teresa Suárez treats her subject in an indirect way. What she shows is not the central object (namely Shelinger himself, or his sculptures). „She leads the viewer out of her frame“, to quote Roland Barthes. And this is why her photograph can be read as an embodiment of eroticism, and here again, this has absolutely nothing to do with sexuality. This interpretation merely refers to a definition of eroticism as an art of evocation.